An Interview By: Samantha Dinon

This month’s Stokes Employee Spotlight is on Matt Touhey, our Production Director & IT Manager. He has some 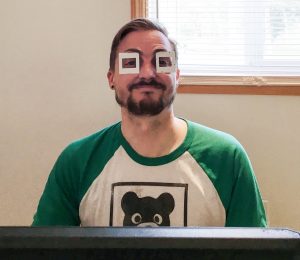 great news to share, so I hope you enjoy this interview with one of Stokes Creative Group’s longtime employees.

SD: Hi Matt. Thanks for taking the time to tell our readers a bit about yourself and some Stokes news today.

MT: Of course. My pleasure.

SD: Okay, before we get started, let’s take a minute to get some background information on you. Where are you from, where did you go to school, and how long have you been at Stokes?

MT: I moved around a lot as a child and grew up mostly in Union, New Jersey, but I’ve lived in Philadelphia for the last 13 years. I went to a few schools before deciding on The Art Institute of Philadelphia where I got my Bachelor of Science in multimedia and web development.  I’ve been at Stokes for almost 10 years.

SD: Great. You mentioned you’ve been at Stokes for almost 10 years, so what does a typical work day look like for you?

MT: I do a little bit of everything, so each day is different. One day I could supervise the production team on a video shoot and the next I could be doing web or graphic design work. I also spend time fixing computers, buying systems, filming, working on network shares and some middle management work.

MT: Yes. We’ve been trying to get a drone for the better part of two years and at the end of October, we finally got it. Up until very recently, there wasn’t really a way to get one commercially since at that point it was really like the Wild West. Then something called the Part 333 Exemption came into play, which would allow you to have a drone commercially for profit. We got to work on our application and then a few months after we submitted it, the rules changed.

The FAA said they were no longer doing the 333 exemptions and at the end of August they started what’s known as the UAS Part 107 so everyone can get a license for a small lightweight aircraft.  This created a new type of pilot; a remote pilot where you can get a license just by passing an FAA knowledge test.

SD: That’s really cool, Matt. I know you just took the test in October, what was it like preparing for that?

MT: I spent three weeks studying. They give you an 82-page booklet of information that you have to memorize and at the end there are 35 self-test questions. They give you the section but not the answer and you have to show you have an understanding of different situations. It’s not hard as long as you have the structure to focus and study yourself. They have classes but since we only had about one month in between this becoming a law and the test, self-learning was the best way to do it. I went online, watched videos and took a seminar for pilots by the FAA as well.  Then once you pass and get certified you can fly anywhere in the country.

SD: Congratulations on passing the test. Does that mean you’re the only one that can fly it since you took the test?

MT: No, anyone can fly the drone I just need to be present. What the test does is makes me the PIC or Pilot in Command. The only restriction is that I can take over control if I see something that isn’t safe or that I’m not comfortable with. I can have a flight crew of three or four people with someone manipulating the controls and someone keeping an eye out to make sure there aren’t any hazards. It’s actually illegal to fly a drone and just use its camera to see where it is. There is something called VFR Visual Flight Rules, which monitor things like how many clouds are in the sky and the distance the drone is from the ground that we also need be aware of.

SD: Wow, I had no idea that so much went into being able to have a drone, this is all so interesting. Enough about the technical stuff though, what are your plans for the drone at Stokes? Also I heard you named it, what is the drone’s name?

MT: The main point is to assist with video production and photography. It will increase the production value of our documentaries and save us a lot of money on aerial photography. The drone’s official government name is “Droney McIldrone” but we also had to register it on the DGI Flight app so we can manipulate the camera and the guys named it “Droney DeVito” there. So, it has two names but as far as the government is concerned, it’s “Droney McIldrone.”

SD: That sounds like it will be great for our clients and the name is hilarious! Since this is your employee spotlight and not just about the drone, let’s wrap up with some fun questions about you. What is your spirit animal, what do you like to do on the weekends, what is your favorite part of your job and who is the world’s best soccer player?

MT: I don’t really think about being an animal so I’m going to go with a fox, they have a nice aesthetic. I don’t like to do anything on the weekends, it’s nice to finally relax. My favorite part of my job is definitely that every day is different. This last one is tough, I can pick who actually is the best or I could pick my favorite player. As far as the best in the world, it’s Messi, no one can argue that, but I’m not a huge fan of his. My favorites rotate between Arsenal players, Özil, and Sanchez who are also some of the best in the world.

SD: Thanks again for your time Matt. I know you’ve been really busy lately and those were great answers.

I hope you enjoyed this November edition of the Stokes Spotlight. I’ll be back again next month with another interview of one of our talented team members. In the meantime, if you’d like to learn more about our drone services, please give Matt a call at 609-859-8400, or call Patty Egan to schedule your aerial drone needs today.