Stokes Creative Group, Inc. has been in the story-telling business for more than 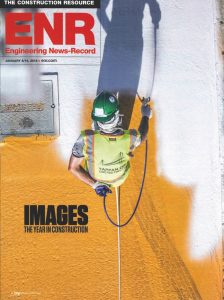 three decades with award-winning photography, videography, marketing services and more. This past January, ENR (Engineering News-Record) selected Zac Stokes’ image from the Tappan Zee Hudson River Crossing Project (New NY Bridge) as the cover photo for their annual “IMAGES: The Year in Construction” issue – a highly-anticipated copy of their weekly magazine with more than 47,000 subscribers. Today we’ve got an inside view for you to hear the story of this image. Enjoy the interview!

NICOLE: Ok Zac, let’s start with the story of how you took the cover photo featured on the January ENR magazine?

ZAC: This photo was taken at the Tappan Zee Bridge project from the top of the gantry. I saw the operation going on and the opportunity to capture a unique view, so I used my tripod to extend the camera body past the gantry steel or to get an unobstructed shot and waited patiently for the laborer to continue his work below me.

NICOLE:Is this why someone might think that the image appears to be taken by a drone?

ZAC: I can see how someone might presume that considering it is a straight down aerial view but is actually just me climbing into the correct position and then waiting to catch the right moment.

NICOLE: What has it been like, in general, photographing the documentation of the largest construction project on the East Coast?

ZAC: Working with the PR team on this project has been a surreal experience – from riding the tugboats breaking up ice in the frigid winters, to climbing the 417-ft ladder within the tower just to get one shot of a webcam repair, to having the opportunity to photograph President Obama when he came to deliver his infrastructure speech. With a project of this magnitude I’ve always relied on the trades to let me know when things are happening – the workers’ information has always been key. Every crew member on that bridge has been critical to the successful and safe construction of the bridge – including the success of my work – and they deserve a lot of praise.

NICOLE: What about this photo stands out to you and what camera did you take it with? 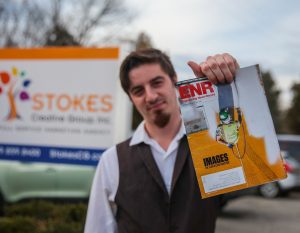 ZAC: The picture stands out to me because of how vibrant the colors are of the waterproofing material, especially in comparison to everything that had been done on the project previously. I’ve been on the project for seven years so to see such a very distinctive finishing touch was really cool. For this shot I used a Canon 5DSR with a 16-35mm wide angle and a standard UV filter.

NICOLE: When the issue came out, what did you think of all the other photos featured in this year’s issue?

ZAC: The other photos in this issue capture some great, irregular angles and positions of a photographer daring to acquire such shots; from dangerous and dirty locations to precarious aerials. One shot that stood out to me was a company that used a second drone to get a shot of their already active drone giving you that bird’s eye view of a bird’s eye view.

NICOLE: Tell me about a few of the other photos that you submitted for this contest and which one was your personal favorite that you would’ve liked to see on the cover.

ZAC: When I sent in my best photos for the contest my goal was to win the cover, so I picked a lot of different vertical shots that would be perfect for a magazine. My personal favorite images are the shots using the heavy welding with sparks because they’re taken at such a low speed that you can see the entire trail of sparks and the whole adventure of that little piece of flame always enthralls me.

NICOLE: If your goal had always been to be featured on the cover of this magazine and you’ve achieved that at such a young age, then what’s next for Zac Stokes?

ZAC: Now that I have been featured on the cover of ENR, I’ll focus on achieving some additional personal photography goals; being able to shoot more crazy and exciting things to keep myself interested. I’d also like to help other photographers in our company to improve their skills so they can achieve goals like I have.

If you’re interested in speaking with Zac about your photography needs, please call 609-859-8400. Stay tuned for the next Stokes Spotlight and thank you for reading! 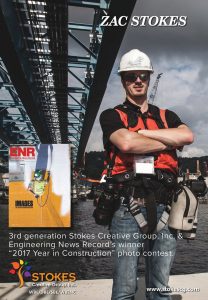